Bethania was founded by Danish Immigrants in 1896.  It was originally named “Danish Evangelical Lutheran Church” and called its first pastors directly from Denmark.  The congregation changed it’s name to “Bethania” (Danish for “Bethany”) in the early 20th century.  Danish was the official language of the congregation until the 1940’s.

The first church building was built on Silver Street (now Merchants Moving and Storage parking lot) across from the Garfield School.  The Wright Ave Church was built in the 1950’s and the education wing completed in 1967.

Most members of Bethania don’t know much Danish these days (aside from the word “AEbleskiver” of course!) though we are proud to count amongst our members several native Danes who had the courage to start a life here across the ocean from their homeland.  We honor the Danish heritage of those who founded our faith community each Christmas Eve with a Danish-Language candle-light service and each Spring with our annual AEbleskiver Brunch.

… check this page in the future for more information! 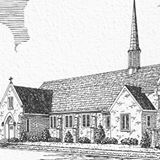